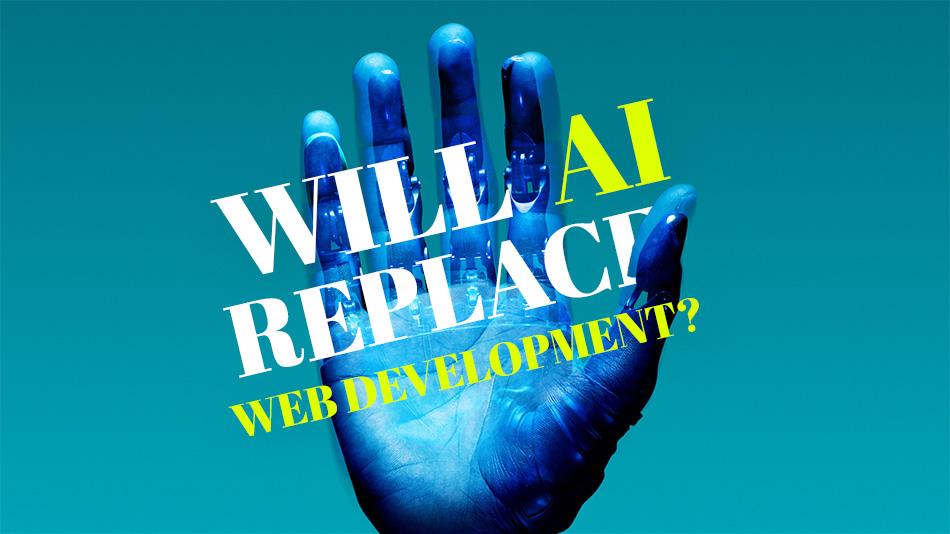 Will web development & web design be replaced by AI?

Our world is changing, and one question that might come up on everybody's lips no matter if you are working with people, production, animals, or programming is: Will my job be taken by artificial intelligence one day?

There are many different opinions about this matter, and giving a direct and correct answer is difficult cause it depends on who you ask. Elon Musk is scared about the development of artificial intelligence and says that we should be careful not to give too much power to technology and Blake Lemoine got fired from Google for stating that their AI bot is alive based on a conversation he recently had with it.

A recent study shows a confused American population when it comes to deciding whether artificial intelligence is good or bad for us in the long run. In a study from late 2021, they figured that 71% believe AI will lead to a loss in employment opportunities and 74% believe it will lead to a loss of personal privacy.

In this article, we will talk about what artificial intelligence is, how AI is being used in web development today, what the potential use-cases are, and lastly what you all came for if we believe AI can take your job in web development or web design.

What is AI (Artificial Intelligence)?

We have probably all seen the movie "I, Robot" where Will Smith fights against robots that have taken over the world. Somewhere we probably all have the fear that someday robots might become so smart that we humans become obsolete and destroyed, but that is far from the reality of what AI is today. With that said, this may be what AI might become in the future, but at least for now, it is not the case.

In today's world, we are using artificial intelligence for positive things such as factory production, home assistance, blog writing, and even programming. It removes some of the repetitive work that otherwise would have been done by humans, and it helps us clear tasks in a faster and more efficient way. In 2022 Github Copilot came out, and it is an AI made to help web developers write code faster without having to invent the wheel every time a new function is written. By writing comments about how your function should work Github Copilot automatically looks up similar functions and suggests them to you so that you don't have to write them yourself.

Reactive machines are the most basic form of artificial intelligence. It doesn't have a memory of past experiences and therefore it is only able to handle what happens right in front of it and in the moment.

Limited memory is an AI that is capable of storing data and predictions for future use. This type of artificial intelligence is for example used when writing blog posts based on topics. The more data it stores in its database, the smarter it becomes and the better it becomes at handling the tasks you give it.

Theory of mind is as the name implies theoretical. In today's age, we still haven't reached a level where we are capable of implementing this into a machine. This category bases itself on the psychological premise that other animals and humans have thoughts and emotions that affect one's self.

The last level/category is self-awareness and sometime in the future, we might be able to implement this into a machine. The self-awareness level is when an artificial intelligence understands its own existence in this world and possesses a human-level consciousness.

AI use cases in web development

Artificial intelligence can be used for many things in web development, and in fact, it already is. Here we have listed a few of the use cases to give you an idea about where you already might find AI.

If you have started a chat on a website where the chat agent clearly stated it was a robot, then in fact it would have been artificial intelligence. Today we use AI to handle customer chat support, so the AI's job is to understand what the customer is writing and answer back with useful information.

The chatbot still has a long way before it is so good that it could completely replace a human being, but for simpler tasks, it has proven to work okay. Usually, a human will feed it with lots of answer targets which will make it able to answer questions related to the desired topic.

As we mentioned earlier in the article, AI is being used for faster coding as well. Earlier in 2022 Github Copilot came out, and its job is to help you code faster by suggesting functions based on comments you write.

So basically its job is to understand your code need, look through the Github repositories for similar functions, and suggest them to you.

It can be boring and hard to maintain and ensure quality in development projects, but luckily we can use AI algorithms to declutter and improve performance.

We all know that researching a topic can take a long time and be boring, but with artificial intelligence, we can let an algorithm do the work for us, and often we will see results much faster than we would have if it was done by a human. By feeding sufficient data to the AI it can scout the internet for related information that will either make it smarter or help with the research.

Let's take an example where we wanted to research what an AI can do. Instead of going to Ecocia like we normally do we could explain the topic to an AI and wait a few seconds for it to bring back oceans of data about a certain topic. In fact, we can even make it write an article for us if that was the case.

Will developers be replaced by AI, yes or no?

No, we don't believe web developers and designers will be replaced by AI (Artificial intelligence) in the future. If we go back just a few years we see tons of articles stating that our jobs are already being phased out and that we can expect to be looking for a different career within a few years, but that does not seem to be true.

Instead, we believe that web developers and designers will have to live side-by-side with AI. We see that AI isn't here to take the jobs, but instead co-exist and help us develop faster, smarter, and more efficiently. There are many things that AI is capable of, but a human brain has functionality and creativity that simply is too advanced for the machines.

An example from web design is that AI would be fed thousands of different web design examples and from that, it would be able to create variations that it can suggest. But it won't be able to think freely and be as creative as we designers have to be to solve problems. So in a world where we constantly seek new and mindblowing designs, it simply wouldn't be possible to use an AI alone.

Instead of trying to replace our jobs as web designers and developers, we found a way to co-exist and improve human intelligence where it lacks behind. Tasks that would take a long time to solve are now done in only a few seconds and repetitive tasks are being handled automatically without us having to physically do them.

Thank you for reading this article about whether web development and web design will be replaced by AI in the future. All the content in this article is of course only our speculations and we cannot predict the future, but based on research and first-hand experience we believe that the outcome might look similar to what is written in this article.

We are very interested in hearing how others work with AI, implement it into projects, or live side-by-side with it every day, so please comment below so we can broaden our knowledge.