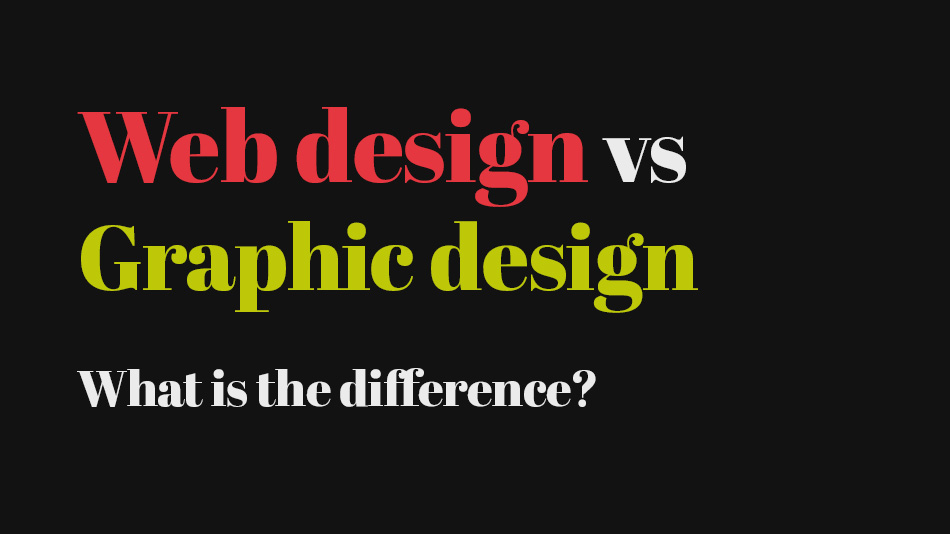 Web design vs graphic design - What is the difference?

In this article, we will look at what a web designer does and what a graphic designer typically does, and how these jobs are similar and yet so different.

What is a web designer?

A web designer is a person whose job is to create visual graphics on the internet. In this role, you often work with creating visuals such as illustrations, images, and designs, but instead of ending your job description there you also work with coding in HTML, CSS, JavaScript, and possibly other languages.

In case you are wondering what a UX designer is, then here is an example: You have probably seen the photo containing a big dilemma about two different types of ketchup bottles. One bottle look really good but was made in glass so the overall user experience was bad. The other side of the photo had the same bottle but turned upside down and made of plastic. By making a few adjustments the overall experience became much better even though it is the same product.

What is a graphic designer?

A graphics designer is also working with creating visual content, but instead of only focusing on content for the internet they also work with content made for print.

A graphic designer is more focused on the visual content compared to a web designer, and some of the tasks they handle are:

Graphic designers can work in many places, but you will usually see them at companies such as Advertisement agencies, Web design agencies, Marketing companies, Print, and online publishers, Freelancers, or Non-profit organizations.

How are the two jobs different?

Web design and graphic design look like each other in many ways, but some key differences are important to understand. Often companies hire graphic designers to do tasks that only a web designer could do and vice-versa.

A web designer is focusing mainly on designing for the web. They create visuals, make color palettes, do wireframes, and do other stuff related to website designs.

A web designer also codes a website using modern frontend languages such as HTML, CSS, and JavaScript, which is something that a graphic designer doesn't do.

How much a web designer gets in salary depends on the experience the person has, which country they work in, and which company they work for. Education can also play a key role in the amount of salary a web designer typically gets per month, but education is not a requirement in the industry.

Just as with web design, the salary amount depends on the amount of experience the graphic designer has, education, which country they work in, and for which company they work. Statistics show that the average salary per month is approximately $5.100.

Which role will be more in demand in the future?

Graphic design has been an important part of publications for many years, but as the world is moving towards digitalization I would say that web design will probably be the job that is in more demand in the future.

Thank you for reading this article. I hope that you now have an understanding of the differences between web designers and graphic designers. I would like to encourage you to please share this article with your network!

If you are interested in knowing if it's possible to become a successful self-taught web designer, then head over to this article to learn more and zoom in on how I became a web designer.